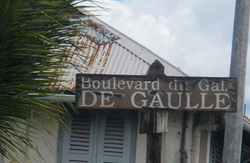 Its official. The French are jolly happy to have their empire across the world. Alright, it may cost them several billion euros every year, and brings in practically zero in return (bar some fantastic honeymoon locations, and a  rather nice heap of nickel from New Caledonia), but think of the glory of it all.As the head of tourism in Noumea told me today “Well, you used to say that the sun never set on the British Empire… but the truth today is that the sun never sets on the French.” And indeed, when we later strolled on the beach and saw the hordes of elderly, male Frenchies playing petanque in the rays of the sun across the balmy lagoon, and when you thnk that  pretty much the same scene would have played out a few hours before in La Reunion, and a few hours before that in Paris, and then across the Atlantic in St Pierre et Miquelon, and then down in Guyane… well, you have to agree.

The French have their Empire, and rather than winding it down, like everyone else is, they are actually expanding it; only last week, tiny Mayotte, a dot in the Indian Ocean, changed its status from part timer to full-time Department, so it too can have the yellow post boxes, full French school curriculum and entire social services package, thanks very much. Meanwhile all the French way of life is taken along for the ride.

How about the Frenchman who has founded the world’s only vineyard on coral soil? (Rangiroa atoll, French Polynesia). Never mind that it does not make any money, Vin de Tahiti churns out thousands of bottles of red, white and rose wine every year, so ex-pats can be sure to have something to quaff alongside their foi gras. Which is of course also made in the proper Gallic way in the Outre-Mers, be it New Caledonian foi gras or St Pierrais foi-gras.  Those ducks are force-fed in exactly the same way  as they are home in the Dordogne, and a man even turns up every year from the Dordogne to check that the quality of the gavage produces the right quality of foi gras.

Then there’s the whole issue of General de Gaulle, who loved the Outres-Mers so much he visited them all after WWII, presumably to tell them how much he appreciated their help. Yes, there are war memorials in all these far-flung French outposts, for all those people who died for the glory of La France, in both World Wars. Alongside the war memorials, and roads named after grim French battles (Rue de Somme, anyone?),  there are as many memorials to de Gaulle himself. Boulevards, squares, roundabouts, statues; every capital city here has a de Gaulle moment.

Naturally I have captured them all, be they pristine, shabby, fringed with palm leaves or, as in one case (Guyane), above a sex shop.

It’s pretty unfashionable to be so gung-ho about your roots, but seemingly the French just don’t give a damn about all of that. They fly their Tricoleur all around the globe, and insist on proper French being spoken in the schools, and play their petanque and read their Le Monde,  and I have to confess finding something rather stylish in such brazen confidence.