The Empire of the Dead 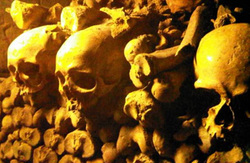 The French are very clever. First, they went a bomb on Catholicism, inventing theGothic cathedral and enshrining the dead therein. Several hundred years later, they became disillusioned with that idea as Romanticism took over. A sizeable minority got fed up with church and religion, and decided to venerate Death as simply the end of Life (and thereby excusing themselves to enjoy Life to the fullest).

The most extreme example of this is in the Catacombs of Paris, where millions of dead (and presumably God fearing) Parisians were exhumed, put into carts and taken along to the Parisian underground where their skulls and bones were used to fill up holes caused by overzealous quarrymen. This spooky legend over the entrance to the Catacombs; ‘Stop! You are entering the Empire of the Dead!’ thrills hundreds of tourists on a daily basis and reminds us all that we have to live life to the utmost.

Which was my plan when I left the Catacombs and went straight to my favourite emporium, Galleries Lafayette. Carpe diem!